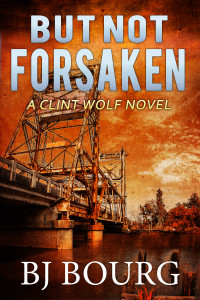 This is not a political “October Surprise”, but a literary one. While it might not be a surprise to some, it’s certainly a surprise to me. As I recall, I’d originally projected releasing the third and final book in my Clint Wolf Trilogy in August/September. However, I began getting my butt kicked at work and in my home life, so my writing suffered and I was forced to push the release date back to September/October. As October approached at breakneck speed, I began to fear I’d have to push the date back to November…but then came my “October Surprise”.

I’d anticipated working every weekend in September and October, but was surprised to have them off. I was also surprised when I got an unexpected day off during this week, and I used nearly every minute of those days to finish writing and editing BUT NOT FORSAKEN. When I announced to Amanda that I had finished, her first words were, “Great, now I can have my husband back!”

So, without further delay, here’s the blurb for BUT NOT FORSAKEN:

No one knows why the district attorney is gunning for Susan Wilson, but Clint Wolf is determined to find out—even if it’ll get him in trouble. While he works to clear Susan’s name, his crusade is sidelined when a bar manager is murdered during an apparent armed robbery. The method of operation is eerily similar to those used by the ruthless gang who murdered his family, and Clint might soon have to face down the demons from his past to solve the mystery.

Will Clint walk that fine line between good and evil, or will he abandon his principles to settle an old score? Whatever choice he makes, one thing is certain…it’ll come at a hefty price.

And here’s the link to it on Amazon: BUT NOT FORSAKEN: A Clint Wolf Novel (Book 3)