At long last, BUT NOT FOR NAUGHT (Book 5 in the Clint Wolf Series) is now available at Amazon. I would’ve gotten it out earlier, but we’re in the middle of a DA election at my day job and I’m busy doing everything I can to help my boss get elected. The election is March 24th, so things should get back to normal for me soon afterward, and I’ll be able to start on the next Clint Wolf book, which is titled BUT NOT FORBIDDEN. I’m hoping to publish that one in May/June 2018, right before I head off to the Smoky Mountains for the Fourth of July.

In any event, here’s the description of BUT NOT FOR NAUGHT, along with the cover and link to it: 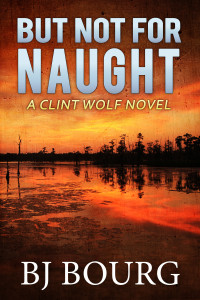 The only thing worse than being stabbed in the back is being shot in the back; and that’s exactly what happens to local bar owner Mitch Taylor. As Clint Wolf and Susan Wilson investigate, the list of suspects begins to grow and it includes the victim’s estranged wife. Just when it appears Clint is closing in on the killer, things takes a surprising turn and the entire complexion of the case is changed.

As though the twist in the case weren’t enough, Clint finds an old photograph that turns his personal life on its head and sets him on a dual quest for answers. Not only is he interrogating suspects, but he also interrogates his mother, and he begins to wonder what will be more difficult—discovering the secret to his past or solving Mitch Taylor’s murder. One thing is certain…no one will be the same after this is over.