BLOOD RISE, which is the sixth and final book in the London Carter mystery series, is now available. Here’s the description:

In the final book in this series, London Carter has planned the perfect surprise vacation for Dawn Luke. They’re heading to the Smoky Mountains National Park, where he’ll drop down to one knee in front of Abrams Falls and propose to her. However, when a grisly discovery is made in a small community within Magnolia Parish, they’re forced to return home to investigate.

They soon learn that the victim, Kathleen Bertrand, has been killed in the most heinous manner imaginable, and they delve into her past looking for anything that might help explain what happened. They locate some skeletons in her closet and, while one of them might be motive enough for murder, the brutal nature of the crime doesn’t seem to fit.

As Dawn and London drive to the Gulf Coast town of Dark Sands, Mississippi to follow-up on a piece of evidence they discovered in Kathleen’s car, Deputy Abraham Wilson is called to investigate the disappearance of another Plymouth East woman. Fearing the cases are connected and the second victim might suffer the same fate as the first, they work nearly nonstop to bring the killer to justice.

No one knows if they’ll locate the victim in time to save her, but it’s clear London won’t be dropping down to one knee anytime soon–unless it’s to take a shot.

(Click on book cover to buy or read free on Kindle Unlimited.) 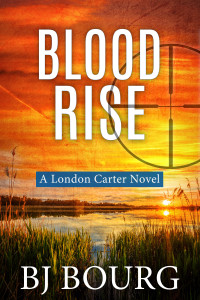 What’s next for me? Book Four in the Clint Wolf mystery series. While that series began as a trilogy, due to popular demand I’ve decided to extend it. I’m currently working on BUT NOT FOREVER and I plan to write six to nine more in the series. If it continues selling well, I might continue beyond that number. At some point, I want to start a series that features Abraham Wilson as the main character. It will be a spin-off of the London Carter series and will feature London and Dawn from time to time.

As always, many thanks to all of you for your support!