I’m happy to announce the release of my latest novel, BULLET DROP, which is the 4th book in the London Carter Mystery Series. While I usually have a “no write” policy on vacations, my wife allowed me to get a little writing done on our anniversary cruise and it enabled me to finish sooner than expected. So, thanks to her for putting up with a few hours of writing, as well as for reading the first draft and pointing out things that needed to be fleshed out or omitted. She is extremely supportive of my writing and I would not be able to accomplish as much as I do without her. I also want to thank Shelly Ourso for reading (or, rather, devouring) the first draft and offering her feedback. She is always such a big help. And I can’t say enough about Christine Savoie and how much I love the covers she creates for my books. I’m so glad she found me!

Well folks, here’s the description of BULLET DROP, along with the cover art and a link to the eBook on Amazon (it will be on sale for $2.99 right out the gate and will remain there for several weeks):

While Dawn Luke travels to her hometown of Arkansas to tend to her sick mother, London Carter is called upon to investigate the murder of a young teenager whose body is found stuffed under the exit ramp of an overpass. It was apparent to London that the murderer wanted to make sure the kid was dead, but the motive for the killing was far from obvious.

Summoning the assistance of Detective Rachael Bowler, the two are finally able to locate the actual crime scene and that leads them to the identity of their young victim. But instead of providing answers, the identification leads to more questions. Could a secret involving the young man lead them to the killer, or will it only muddy the waters and interfere with their investigation?

Whatever the case, this is one killer no one should take for granted–not even a cop as skilled and gritty as London Carter. 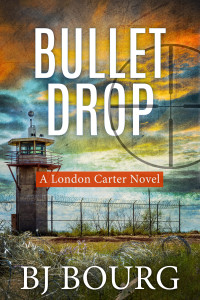 So, what’s next for me? After I finish this blog post, I’ll get “write” to work on the opening chapter of the 5th London Carter Novel, which is titled ELEVATION, with the hopes of finishing it by September/October. I’ll be taking two breaks during the writing of this novel, but will be “writing faster” when not on the breaks, as a few of you have advised me to start doing.

For those interested, the first break will be from July 5 through July 10, when we’ll be bringing my daughter to the Great Smoky Mountains Institute at Tremont for a weekend-long biology class. The second will be from July 28 through August 6, which will be our family vacation in the Smoky Mountains. We’ll be renting a cabin through Mountain Laurel Chalets (as we always do) and will be staying on Ski Mountain Road in Gatlinburg. If any of you will be in that area during the same time frame, give me a holler and I’ll keep an eye out for you. It would be nice to meet and personally thank those of you who read my books and follow my writing career.

Before signing off, I want to extend my heartfelt condolences to all of the people who lost loved ones, or were injured, or had property destroyed during the wildfires in the Smoky Mountains late last year. I go there every year and, while I was saddened to learn that four of the chalets I’ve rented over the years were lost in the fire, it was downright heartbreaking to hear of all the lives lost and the injuries sustained. My best to the people of that area as they rebuild and try to move past the pain and loss.