The meeting is free of charge and is open to the public. Books will be available for sale to those who would like to purchase them.

“Cops and Authors” is designed to provide hands-on, practical information to local mystery and crime writers, but it is also open to anyone who wants to understand more fully the concepts of police procedure.

Crime writer and crime fighter O’Neil De Noux will open the conference with a presentation titled “New Orleans as a Partner in Crime” that focuses on the mysteries that have occurred in the city, but also explores the city as a character in its own right.

In March 2011, the novel John Raven Beau was published by Big Kiss Productions, which was named 2011 Police Book of the Year by Police-Writers.com, a group of more than 1100 state and local law enforcement officials from state and local law enforcement agencies who have written more than 2500 police books. In January 2012, after six months of intensive research and 18 months of non-stop writing, De Noux published Battle Kiss, a 320,000 word epic of love and war set against the panorama of the Battle of New Orleans.

In 2012, O’Neil De Noux was elected Vice-President of the Private Eye Writers of America.

Chief Robert Hecker is on the verge of submitting his debut crime novel to agents. Titled The Accidental Vigilante, the mystery focuses on a young cop who secretly takes the law into his own hands in the hopes of helping keep New Orleans safe. But when his good intentions result in several homicides, he becomes a person of interest to NOPD and a vicious crime ring that wants him and his family dead.

Chief Hecker began his police career in law enforcement with the New Orleans Police Department. During his 28-year career with NOPD, Chief Hecker was awarded three Keys to the City, three Medals of Merit, 14 Letters of Commendation and Supervisor of the Year Award. Chief Hecker rose to the rank of Captain and served as District Commander before retiring in 1995.

Chief Hecker was appointed Police Chief for the Harbor Police Department-Port of New Orleans in October 1995. Under his command is a Uniformed Patrol Force, Marine Division, Police Academy, Detective Division with representatives on the FBI Joint Terrorism Task Force, and the BEST Task Force. All police officers with the department are fully trained and POST-certified. Chief Hecker also manages the Port’s Emergency Response Firetug Vessel, “The Gen. Roy S. Kelley,” and the team of firefighters who staff the vessel. 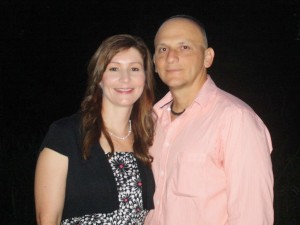 B.J. Bourg will discuss the facts and myths surrounding sniper work, focusing on the type of training necessary to enable a sniper to take a life. Bourg and his wife Amanda, will talk about post-traumatic stress disorder and how to develop believable characters with P.T.S.D.

Bourg is a 25-year veteran of law enforcement and has worked as a patrol cop, detective, police academy instructor, SWAT officer, sniper leader, and chief investigator for a district attorney’s office. He is a former professional boxer and a lifelong martial artist.

More than 185 of his short stories and articles have appeared in magazines such as Woman’s World, Boys’ Life, Tactical Response, and LAW and ORDER. He is also the author of three mystery novels: Hollow Crib, (2016), The Seventh Taking (2015), and James 516 (2014).

Amanda Bourg, PhD, is a psychologist at a rural outpatient clinic for the Department of Veterans Affairs in Louisiana. She received her doctorate degree in counseling psychology from Oklahoma State University and a post-doctorate master’s degree in clinical psychopharmacology from Alliant International University. Dr. Bourg has extensive experience treating people who suffer from post-traumatic stress disorder, anxiety, and depression, and one of her research articles was published in the 2006 Journal of Aggression, Maltreatment, and Trauma.

For more information regarding this presentation, contact Chris Smith, manager of adult programming for the library, at (504) 889-8143 or wcsmith@jefferson.lib.la.us.

In accordance with the provisions of the Americans with Disabilities Act of 1990, Jefferson Parish shall not discriminate against qualified individuals with disabilities on the basis of disability in its services, programs or activities. Library patrons that require auxiliary aids or devices or other reasonable accommodation under the ADA should submit requests to the ADA Coordinator at least 48 hours in advance or as soon as possible. A 72-hour notice is needed to request Certified ASL interpreters. ADA Coordinator / Office of Citizens with Disabilities, 1221 Elmwood Park Blvd., Suite 210 Jefferson, LA 70123; (504) 736-6086; ADA@jeffparish.net

The Jefferson Parish Library system consists of 16 locations that stretch from the Lakeshore Branch on the edge of Lake Pontchartrain to the Grand Isle Branch just steps away from the Gulf of Mexico. The library system consists of two large regional libraries and seven branches on each side of the Mississippi River. The East Bank Regional Library (4747 W. Napoleon Avenue, Metairie) serves as library headquarters. For more information, contact the library at (504) 838-1100.