Amanda loves to run and I love Amanda, so it’s been easy for her to check running goals off of her bucket list. One of those dreams was to run the Allstate Sugar Bowl Crescent Connection Bridge Run, which was set to begin on the West Bank of New Orleans and cross the Mississippi River via the Crescent City Connection Bridge. I’d already started enjoying our “run-aways” for a night here and there, so I hadn’t hesitated many weeks ago when she asked if I wanted to do the Bridge Run, which was set for June 6, 2015 at 7:00 PM.
Fast-forward to yesterday and we’re packing to head to New Orleans for the event. We stayed at the Hilton Garden Inn on South Peters and checked in around three. The first thing we noticed when we explored our room was that our window faced the Port of New Orleans. (We woke up this morning to see The Carnival Dream docked directly across from us. We got married on The Dream last year, so this was a special treat.)
After we unpacked our stuff, we walked to Wolfe’s Restaurant at the Marriott (the address is 859 Convention Blvd., but we entered off of Fulton St.) and had an early dinner. Amanda is allergic to black pepper (which means she can’t eat anything cooked in Louisiana:-), and she asked the waitress if they could accommodate her condition. The waitress made two or three trips to the kitchen and back, promising to “figure it out”. Well, she did, and the chef made Amanda a great fried shrimp salad that was tasty, but didn’t hurt her stomach. The chef even came to our table to ask if the meal was acceptable. (I told Amanda he just HAD to see this “creature” who couldn’t eat Louisiana seasoning. He’d probably never heard of such blasphemy.)
After eating, we got dressed for the run, walked to the pick-up point, and took a bus to the West Bank, where we retrieved my bib (Amanda had her bib shipped to the house) and waited for the race to start. 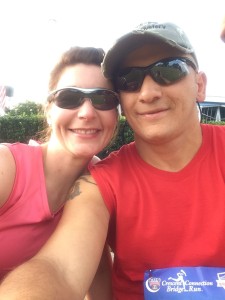 When the race gun fired, Amanda and I ran to the front of the line, passing up thousands of people, and made it across the bridge in record time. We received a hero’s welcome on the other side, were interviewed by national news media crews, given the keys to the city… 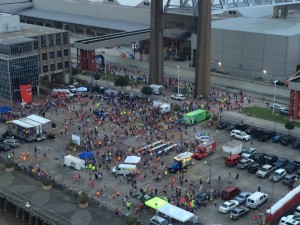 Wait a minute…none of that happened. Instead, we took our spots somewhere toward the middle of the line and walked/jogged to the other side. Along the way, we stopped a dozen times to take pictures (Amanda shot a nice sunset) and we even changed lanes multiple times. We didn’t care what the sign said…we’re outlaws. 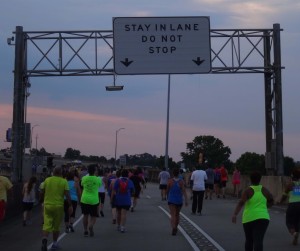 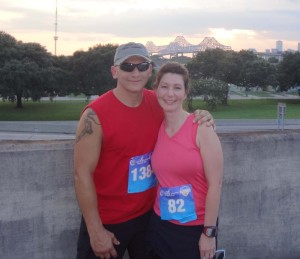 The run distance was four miles and it rose to more than three hundred feet over the Mississippi River. It was amazing to be up there in the warm evening air as traffic whisked by just several feet to our right. It was especially cool to stand over the grating and look down at the water so far below. 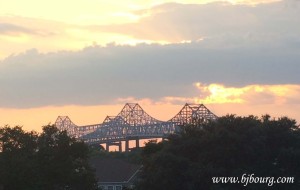 Along the way, we saw some interesting sights and witnessed people of all ages participating in the event. We passed a man and his son who each had a Go Pro attached to their heads. They looked excited to be doing the event. A little later, we stopped to take a few pictures and they passed us…they no longer looked excited to be there. The boy had “Go Pro hair”, but his Go Pro was gone. He was dragging his feet and staring at the ground, probably wondering why in the heck he had agreed to do it. His dad was trudging along, probably wondering why he hadn’t stayed home and cut grass instead. Another boy told his father, “Daaaaad! My feet are numb! They’re asleeeeeeep!” We saw several people stopping to stretch their legs or vomit, and at least two people fell out along the way. (I hope they’re okay. It was definitely hot, so anyone not accustomed to exercise and being out in the heat might have struggled somewhat.) 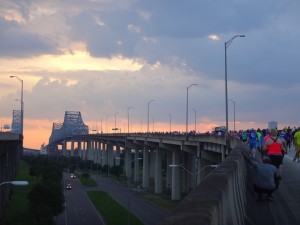 All in all, it was a beautiful day and a nice event. While I still don’t like to run, I do very much enjoy our “run-away” stay-cations.
Thanks for reading!