For those of you who know us, it’s no secret Amanda loves to run and I hate it. My lifelong creed has been, “I don’t need to practice running away . . . I plan to stand and fight,” while one of Amanda’s lifelong dreams has been to run a marathon. No big deal, right? I could simply meet her at the finish line. However, there’s a catch . . . she doesn’t want to run it alone. Can ya see how that might cause a conflict?

Back around the time we first met, Amanda was already signed up for a half marathon and I decided to run it with her. A bold move for someone who’d never run more than about five miles at a time in his life and who refused to run unless he was chasing a fugitive, but I figured, “How hard could it be?” Sure, I tried to supplement my fight workouts with running over the years, but after running a mile or two here and there, I’d get bored and stick to fighting. In any event, we ran the half marathon with no training (Amanda was too busy falling in love with me to train and I hadn’t had time to do any fight training since becoming a single dad) and we finished at 2:57:26. 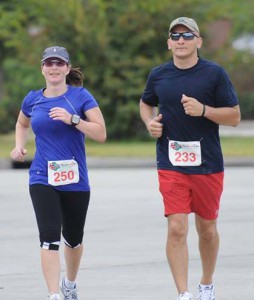 Neither of us cared about our time, but when Amanda recently started talking about the marathon coming up in February, she explained that we had to complete it in under seven hours or we wouldn’t “finish”. Knowing how important it was to her, I decided to start running with her to prepare for it. It didn’t take me long to realize some things had changed since the last time I’d run.

I began experiencing pain in the front of my ankles that grew increasingly worse as I ran and there was pain in the front of my knee throughout the run. I ran with Amanda a few different times and started experiencing the ankle pain earlier in the run, which seemed to indicate it was getting worse. Certainly not wanting to cause permanent damage over “running”, I slowed my pace to a fast walk, which was equivalent to Amanda’s slow jog, and would jog intermittently. The pain returned when I jogged, but subsided when I walked.

Knowing I had to move faster than I was, I did some research online to try and fix the problems. The knee problem was fixed with a simple Patellar tendon strap. The ankle problem, not so simple.

I went to a popular medical site and learned what I was experiencing was possibly anterior ankle impingement. According to this website, I would have to have surgery or die. (Not really, but when you research your symptoms on the internet, doesn’t it always seem like you end up dead?) Other than surgery, the site suggested a long resting period and slow rehabilitation with a physical therapist. It also said something about the tibia rubbing against the bones of my ankle due to the angle of flexion . . . or something like that. I quit paying attention when they mentioned a physical therapist. I’m a do-it-myselfer and was looking for options I could do at home to solve the problem. 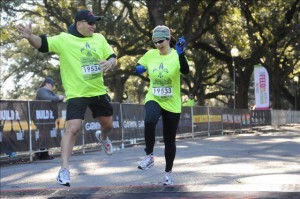 That brings us to this morning. Amanda woke up bright and early to go running. She was trying really hard to be quiet as she slipped out of bed and returned to the room with a cup of coffee, but I’m a ninja and woke up when she thought about getting out of bed. I decided I would go “fast-walking” again and see if I could keep up with her quicker jogging pace. It took her about twenty minutes to get ready and I popped out of bed as she was walking out the door and still beat her outside.

We hadn’t gone half a mile when my “fast-walk” pace brought on the pain in my ankles. I told Amanda to just go ahead and get her workout in. As I walked, I began thinking about everything I’d read and considered what I was doing. I remembered reading that my tibia could be rubbing the bones of my ankles because of flexion. During my “fast-walk”, I had extended my stride and caused a deep flexing of my ankles. Although I’d been told all of my life to land on my heels and roll toward my toes when I ran, I decided to discard that philosophy. I began utilizing a shuffling motion to jog, landing flat-footed and taking smaller, quicker steps. This greatly decreased the amount of flexing in my ankles.

I ran with no pain until I caught up to Amanda. When I told her what I’d discovered, she told me she’d read somewhere that a runner with anterior ankle problems should land on the balls of their feet. (I know what you’re thinking . . . why didn’t she tell me that earlier? I thought the same thing until I realized how distracting it must be for her to watch my hot mess running around the neighborhood. And when I say “hot mess”, I mean covered in sweat from my ball cap to my socks–not a pretty sight.)

In any event, we ran 5.5 miles in just over an hour and I didn’t feel any more pain. It was a big relief to finally figure out the cause of the pain and solve the problem, because I really want to give Amanda what she wants . . . and she wants to finish the marathon in under six hours.

“So, then,” you might ask, “Wherein lies the “joys” of running for a person who hates to run?” The truth? The act of running brings me absolutely no joy. I hate it now as much as I ever did. However, the joy comes from spending quality time with the person I love, doing what she loves to do.